Abortion has been linked to a 100 fold increase in autism, ADHD, ADD; world’s highest rate of obese children taking 400,000 lives and costs $100 billion EACH YEAR; a tripling of the cancer and breast cancer rate; the 128 point drop in SAT scores; the ten fold increase in fetal deaths; and our death estrogen-soaked water supply

So ye shall not pollute the land wherein ye are: for blood it defileth the land: and the land cannot be cleansed of the blood that is shed therein, but by the blood of him that shed it. Numbers 35:33

For the life of the flesh is in the blood; and I have given it to you upon the altar to make atonement for your souls: for it is the blood that maketh atonement by reason of the life, Leviticus 17:11

One in a series “Killing Christians Through Better Medicine”

“In keeping with our rejection of the common law understanding of a woman’s role within the family [read: God’s Law], the Court held in Danforth that the Constitution does not permit a State to require a married woman to obtain her husband’s consent before undergoing an abortion” Sandra Day O’Connor. 428 U. S., at 69

By age 45, 43% of women in the United States have had at least one abortion

Roe v. Wade didn’t give American women the “right” to have 58 million abortions–it simply criminalized the right of American men to object 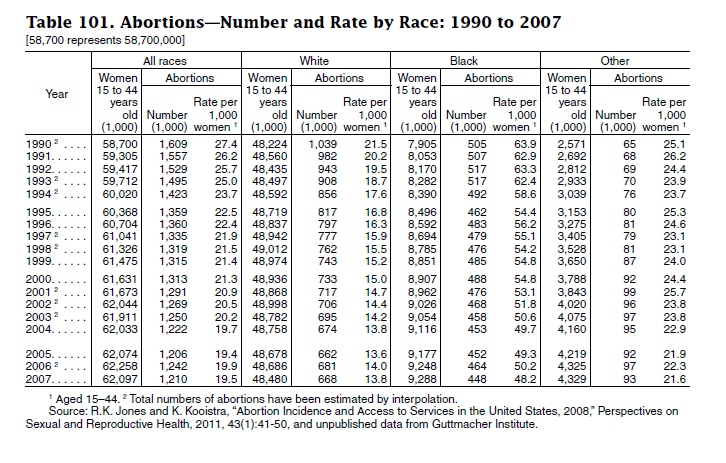 From the Now Discredited Guttmacher

� Non-Hispanic white women account for 36% of abortions, non-Hispanic black women for 30%, Hispanic women for 25% and women of other races for 9%.[6]

� Thirty-seven percent of women obtaining abortions identify as Protestant and 28% as Catholic.[6]

Since Hispanic women are 15.3% of the population and 25% of all  abortions, they are over-represented by two thirds.  Of the 668,000 abortions in 2007 attributed to White women, 167,000 were actually Hispanic women and 501,000 were White women.  Thus the abortion rate of White women is 10.4, which means that Black women are actually 4.7 times rather than only 3.5 times more likely to have an abortion.

The increase in a woman’s probability of dying from breast cancer due to abortion is 12 times greater than the amount by which wearing a seatbelt reduces her probability of death in a traffic accident.   For such women, putting on a seatbelt is about like using a sock to stop bleeding from the carotid artery, or putting a Band-Aid on a gunshot wound

Thanks to affirmative action, “our” US Supreme Court is now populated by known incompetents and anti-Christians who can’t even comprehend the absurdity of legalized abortions.  It took on authority which was prohibited to it by the US Constitution, by legalizing abortion in 1973 with Roe vs. Wade.  It did so contrary to two centuries of case law to the contrary, and in violation of the spirit and intent of our Forefathers who rightly outlawed such sins and abominations against God.  It did so against the will of two thirds of the American people who oppose the legalized abortions which are currently taking place, and against the will of one half to 57% of Americans who view abortion as murder.  It did so against the instructions of the Holy Bible and in violation of the principles of 290 million Americans who are Christians, against the teachings of Jesus Christ, and against God’s will.  It did so against the will of eighty million Catholics whose Pope issued dire warnings about the consequences.  It did so to the great detriment of the forty million Americans who have been aborted to date, and the economy and government to which they would have been productive employees and taxpayers.   It did so against the will of men, even those whose children were conceived in marriage, by removing 100% of his authority in such an important decision while granting 100% of this authority to the mothers who proceeded to kill forty million of their own children.

It left American men with zero legal rights to prevent even one of the 40 million babies murdered in the womb in the last three decades.

This obscene Supreme Court decision left a field mouse with even more “human rights” than a human baby, much less his putative “father”.  It made the womb of an American woman eight times more dangerous to God’s Children than Nazi Concentration Camps were to jews, IF all their ludicrous stories had been 100% true.   It contributed to a doubling of the divorce rate, a tripling of the murder rate, a quintupling of the illegitimacy rate, and a ten fold increase in the number of American men behind bars.

Like a bucket of cold ice water in the face, it didn’t even reduce the pregnancy rate, and instead led to a 5% increase.   Even coupled with the birth control pill, it reduced child birth by a mere 20%.   It trivialized marriage so much that 50 million American men of marriageable age refuse to marry or stay married, leaving 50 million women and mothers in poverty, at the altar, with 20 million illegitimate children whom they cannot rear nor discipline, raising children under the stigma of welfare, most of them cruel addicts of drugs, alcohol, the arrogant husband called “government”.

Even the leftist Gallup Organization notes that only a quarter of Americans support the abortion-on-demand that we now have and that half of them view abortion as murder http://www.gallup.com/poll/indicators/indabortion.asp   How could even this amoral quarter of the population support a law which killed forty million babies which they KNOW is viewed by 137 million of their Americans as nothing less than the government-sponsored murder of potential fellow Americans?

It gave feminists like Shere Hite the chutzpah to brag before a shocked American audience on “network TV” that “seventy percent of American women commit adultery within 5 years of marriage”, causing the birth of four hundred thousand children in families who aren’t even genetically linked to their “fathers”:

Since that ruling was made, against the majority will of the American population, against the good common sense of the 264 million Christians in this country, contrary to common sense and decency, against God’s will, in violation of the teachings of the Holy Bible and every Pope for the last two millennia, against the principles of most other world religions, in contradiction to the vast majority of the preachers and pastors and priests of this country, but to the delight of mental health workers, abortion doctors, judges, jew lawyers, prison guards, jailers, jew doctors whose businesses skyrocketed:

THAT bears repeating: 12.6 million wives have given birth to children who are not the biological offspring of the husbands of those families.

12.6 million wives have given birth to children who are not the biological offspring of the husbands of those families?

All they ask is that married women bear their husband’s children!

As bad as that is, far worse is cheating on their husbands so frequently that 12.6 million children are subjected to the shame, social pathologies, and stigma of not even being biologically linked to their own putative fathers.

And worse than that?  There are 12.6 million men who were STUPID enough to trust women enough to marry them and believe that their oaths to God to honor and obey them would be upheld, who were forced to pay to raise their mailman’s or gardener’s children, at the very same time that they were robbed of their heritage and their heirs.

If this 12.6 million adulterous women were to be punished as the Holy Bible demands that they be and as they should be to bring this practice to a halt, rather than men being 95% of the two million inmates in our jails and prisons, women would be nine out of then of fifteen million inmates.  But punishing wives who commit adultery would REDUCE crimes committed by men, as well as prevent women from committing adultery, which would leave far less than 2 million men in prison.

The worst part of the abortion hoax is that, as abortions accelerated 25 fold (from less than 65,000 prior to Roe v. Wade to more than 1.6 million in 1990), “unwanted pregnancies” and “unwanted child births” (as reflected by the percent of teen births to unmarried women) skyrocketed four fold.  Not only that, but the birth rate of unmarried teens doubled as abortions became more and more available to them, and as their own parents were removed from their serious decisions regarding an abortion, demonstrating that such a dramatic change in our laws DID adversely affect their moral principles, something that was not an improvement for any class of citizen.

From a feminazi web site

Results of an informal abortion poll.

I recently asked readers to answer some questions regarding their views on abortion. Although only 78 people who responded, a couple important points immediately made themselves clear:

The term pro-life should be changed. Almost one quarter of the women who said they were pro-life believed that women should have the choice to have an abortion. That, at least in my point of view, means that these women are not pro-life. They are pro-choice! But saying that you are pro-choice, and thus NOT pro-life, has such a negative connotation.

Girls Talk About AbortionYoung women who’ve had or wanted an abortion talk about the experience.www.standupgirl.com

The Truth About AbortionMake an educated decision, speak to someone via email who can help.www.pregnancy911.com

Who doesn’t want to be “pro life”? The term just doesn’t make sense as the opposite to pro-choice. I am “pro life”… I mean I’m certainly not “pro death,” but I am also 100% pro-choice. This doesn’t make me pro-abortion. I don’t run around touting abortion as the best form of birth control, and I honestly don’t know that I could have an abortion… but I do know that I am certainly not going to impose my views on any other woman. So perhaps the more accepted term should be “anti-choice,” or “anti-abortion,” instead of “pro-life”. I think more women could identify with “pro-choice” if it weren’t the opposite of “pro-life.”

Results of the Poll

Of the 78 women who answered the poll, 73% of them considered themselves to be pro-choice, while 27% felt they were pro-life. I’m not surprised by the amount of pro-choice views, considering the answers were solicited from the women’s issues site, which tends to contain more pro-choice readers.

Of the 57 women who stated that they were pro-choice:

Of the 21 women who said that they were pro-life:

Of all the women polled:

This Web Site is dedicated to the elimination of fatherlessness.